Banded TPMS - A type of TPMS sensor that does not have a valve stem and therefore does not mount to the valve hole of the wheel. First introduced on Fords, banded sensors are clipped into a cradle and secured around the rim by a clamp similar to a large hose clamp. Some aftermarket companies offer a cradle that includes a mounting tab to attach a clamp-in style sensor.

Bolt Pattern refers to the number of Lug Mounts and Bolt Circle, BC, refers to the ring of studs on a Hub.  BC measurement is based off the circumference of the ring.

Cloning (Clonable Sensor) - The process of copying an existing sensor ID number, and many protocols, to an aftermarket clonable sensor by using a sensor cloning/programming tool.

Cold inflation - The pressure in a tire that has been standing still for a minimum of three hours.

Cradle - The bracket used with a banded sensor to hold it in place on the wheel.

Direct TPMS - The use of a pressure sensor directly mounted on the wheels of a vehicle. The pressure inside the tire is measured using a pressure transducer and transmitted to the vehicle’s ECU.

Dual Drill - Wheel Adapters, have 2 sets of lug holes for mounting adapter to vehicle and 1 set of lugs to mount wheel.

ECU – Electronic Control Unit – Embedded system that controls one or more of the electrical system or subsystems in a motor vehicle.

ESN – Electronic Serial Number - The identification number for a TPMS sensor that is unique to every sensor.

Grommet - The pliable elastomer O-ring that forms an airtight seal between the sensor valve stem and the vehicle wheel. Part of a Service Kit.

Hex nut - The nut that holds the sensor valve stem on the wheel rim. Part of a Service Kit.

Hub centric refers to how the inside, or Center Bore, of the wheel or adapter fits exactly to the hub (this reduces vibration and stress on the lug nuts).  Wheels that are not Hub Centric can result in movement between wheel and hub during cornering and acceleration, which can cause vibration, excessive wheel bearing wear, including possible structural failure of lugs.

Indirect TPMS - Indirect TPMS do not use physical pressure sensors but measure air pressures by monitoring individual wheel rotational speeds and other signals available outside of the tire itself.

Inside Diameter, ID, is a measurement of inner diameter i.e. ID of Wheel Adapter, etc.

Learn mode - The status of a vehicle's TPMS receiver when a vehicle TPM relearn is being performed. When learn mode is active, the receiver listens, captures and stores the TPMS sensor ID numbers, and depending on the vehicle, the sensors' locations. Cycles start at left front wheel and work in a clockwise motion. TPM sensors will broadcast using a LF Trigger which can be supplied by either a trigger device or Scan Tool.

LF Trigger – Low frequency signal used to communicate with the sensor for response. Response can be a change of state, i.e. wake-up, or to request the sensor to broadcast, i.e. to pair sensors during relearn process.

Magnet trigger - The use of an "O" or "U" shaped magnet placed around the valve stem to trigger a TPMS sensor RF transmission during a vehicle relearn.

Make inoperative provision (49 USC 30122(b) - This regulation of the Motor Vehicle Safety Act forbids the intentional disabling of an operational TPMS system, but under some conditions, may allow for avoidance of repairing a previously non-operational system. Be sure to follow local laws/ensure state inspection compliance. And, it is always recommended to fully maintain the TPMS system for the improved tire/vehicle safety and efficiency benefits.

Manual Relearn – TPMS Relearn Procedure (Most GM and Ford Vehicles) Perform series steps to put vehicle in learn mode then trigger sensor at each corner of vehicle starting at the left front working in a clockwise motion with a Trigger Tool or TPMS Scan Tool.

Multi-protocol sensors - Aftermarket sensors such ORO-TEK's iORO that are pre-programmed with a variety of vehicle protocols/software.

OE sensors - Original equipment sensors that come from the same manufacturer that built the sensors for the vehicle when it was assembled.

Outside Diameter, OD,  is a measurement of outside diameter i.e. OD of Wheel Adapter, etc.

Placard pressure - The label that indicates vehicle manufacturer's recommended cold tire inflation pressure. It is required on the driver side doorjamb on all late model vehicles and can be typically found on driver’s side door jamb.

Programmable sensor - These are aftermarket sensors that arrive blank and need to be uploaded with vehicle protocol software via a sensor programming tool prior to vehicle installation and use.

Protocol - The software communication language used between TPMS sensors and receivers on a vehicle. This language can vary widely between vehicle manufacturers.

Radio frequency (RF) - The radio wave , measured in frequency, used by a TPMS sensor to transmit tire pressure and other related information to the vehicle's receiver/on-board computer. Typical TPMS radio frequencies are commonly known as 315 and 433 Mhz.

Run-flat tires - These tires enable the vehicle to continue to be driven for a limited distance, but at reduced speeds, etc., in the event of a puncture. Due to the possibility that a driver will not recognize a low or flat tire situation, TPMS is required on vehicles with this tire technology.

Service Kit - Each time a tire is dismounted TPMS sensors should be serviced with a new valve core, grommet and nut. Galvanic corrosion can cause sensors to leak and shorten their life. Service kits for clamp-in sensors include: hex nut, valve core, valve cap, grommet/seal and metal washer, but may also include a valve stem and retaining screw, depending on the application. For snap-in sensors, service kits include: a rubber-coated metal valve stem, valve cap, valve core and retaining screw or nut, unless a notched press clip design is used (Continental).

Single drill - Wheel Adapters, have 1 set of lug holes for mounting adapter to vehicle and 1 set of lugs to mount the wheel.

Single Protocol – A sensor that has been pre-programmed for a specific vehicle and/or protocol. OE Sensors are considered single protocol sensors.

Sleep mode - An electronic mode utilized by TPMS sensors for sensor battery life conservation during shipment, storage, and extended periods on the vehicle without motion. Gen I ORO-TEK sensor can be awakened by airing down the tire completely, waiting 5 minutes, and airing back up. Gen II sensors will awaken automatically once installed.

Snap-in TPMS - A TPMS sensor attached to the wheel rim by a rubber-coated metal valve stem that is pulled into place in the valve hole. From outside the wheel, and without close inspection, such a stem has a very similar appearance to a traditional (non-TPMS) rubber valve stem. 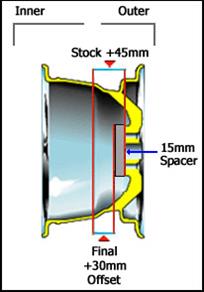 Torque Wrench - A tool that can be used to exert a closely regulated amount of force. This is a requirement when working with TPMS sensors, as a specific low torque setting of in-lbs. or N-m is required when fixing threaded components such as hex nuts, valve cores and band worm drive screws (banded sensors).

TREAD Act - Transportation Recall Enhancement, Accountability and Documentation (TREAD) Act. The TREAD Act was enacted by Congress on November 1, 2000. This is the mandate that set in motion the legal requirement for tire pressure monitoring systems beginning with vehicle model year 2006. Also see "FMVSS No. 138" definition.

Trigger Tool - Sometimes used as an alternative name for a full scan tool, but this term is generally for a more basic version of a TPMS scan tool only built for LF triggering (waking) sensors. Common Trigger Tool manufactured by Motocraft for use on Ford applications.

Valve Cap - A cap that is threaded onto the end of the valve stem to protect against water and other contamination. Part of a Service Kit.

Valve Core - The mechanical device that controls the passage of air through the valve stem. Part of a Service Kit.

Valve Stem – Is a self-contained valve which opens to admits gas into a chamber. i.e. such as air to inflate a tire, and then is automatically closed and kept sealed by gas pressure and/or spring to prevent gas from escaping. Valve stems can be Bolt-In or Snap-In.

Vehicle relearn - A specific set of steps established by the vehicle manufacturer to learn the direct TPM Sensor Electronic Serial Numbers to the vehicles TPM receiver so it can communicate tire pressure and other vital information to the vehicles electronic control unit or ECU. Four common Relearn procedures are Auto Learn, European Auto Learn, Manual Relearn, and OBD II Relearn.

Washer - The TPMS washer is intended for use inside and/or outside the wheel, according to specific installation instructions, and as it deforms to the rim contours, is one-time use only. Part of Service Kit.

Wheel Hub Assembly, also referred to as hub assembly, wheel hub unit, or Hub, is an automotive part used on passenger vehicles and trucks.  The Hub can be machined to accept Threaded or Pressed Fit Wheel Studs.

Wheel Offset is the distance between the centerline of the wheel and the plane of the hub-mounting surface of the wheel. It can be zero, positive or negative, and is typically measured in millimeters. Offset has a significant effect on many elements of a vehicle's suspension, including suspension geometry, clearance between the tire and suspension elements, the scrub radius of the steering system, and visually, the width of the wheel faces relative to the car's bodywork. 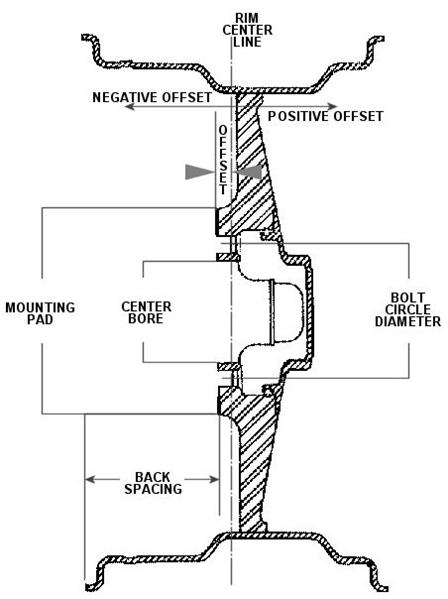 Zero Offset - The plane of the hub mounting surface is even with the centerline of the wheel.

Positive Offset - The plane of the hub mounting surface is shifted from the centerline toward the front or outside of the wheel. Positive offset wheels are generally found on front wheel drive cars and newer rear drive cars.

Negative Offset - The plane of the hub mounting surface is toward the back or brake side of the wheel's centerline.